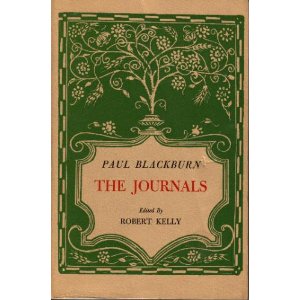 I don’t know why anyone cares what I have to say but they are putting up with it at HTML Giant and Octopus (where I get fuzzy about one of my favorite books no one knows about–Paul Blackburn’s The Journals). And hey–whatdya know–while you’re there also check out outstanding by Julie Doxsee, Molly Gaundry, J. Michael Martinez, etc.

Over at HTML Giant Robb St. Lawrence and Danika pitched in on a collaborative review of Chris Tonelli’s The Trees Around (Birds LLC). I was mostly the straight man here but thanks to Robb and Danika  challenging things are said about logopoetics, first books, and sadism.

Here’s a gem from Robb:

Because I’ve been reading Paul Mann’s book Masocriticism, I’ve been interested in the intersection of masochism and cultural production.  We could potentially group most poetry as motivated by either a sadopoetics or a masopoetics.  Of the two, the masopoetics would probably encompass those “complex conceptually…balletic strings of association,” as they submit themselves to structures and patterns that the poet encounters in the World; the sadopoetics of someone like Chris Tonelli, however, attempt the regulation of that World, to become master of it.  In Trees’ case, the thought tends to want to make it clear to us that one is not in control (but in the process, of course, yearning toward its own sort of mastery, and a reflection of the drive toward such).

So…is it possible for a young poet to write logopoetic poetry without gesturing toward how absurd it is to claim to know?  I would say that it is, but that when it does, it happens in the midst of a foregrounding of much larger structures.  This is the masochist in me.

And another from Danika:

Eeyore was always my favorite Winnie the Pooh character. Eeyore has a place in the canon. He acts as foil to the rest of the song-and-dance group and is the only character who internalizes his world and his place in it. He makes the 100 acre woods three-dimensional because he shades shit in. Like Eeyore’s, Tonelli’s poetics struggle with existentialism. “It is odd to be in this world,/so there must be another where we belong” (p. 15). The whole book is about how the brain is always thinking hard and it’s the only way we exist, which makes us separate from the actual WORLD. Oh, bother. That’s how shit is. “What ARE you going to do?” Nothin.

Thanks again to Danika & Robb for their help–and Ryan for plugging me into this. & Birds & Chris T for answering questions about their process.