Survey this picture of me at my desk surveying a poem which performs a surveillance of my fiancé in a project in which we surveil each other in an anthology full of poems responding to SURVEILLANCE. 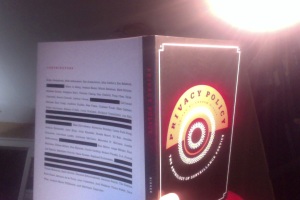 Clocking in at 171 pages. Haven’t had a chance to read it all. But, highlights: Emily Abendroth’s contextualization of current surveillance w/in a history of photographic documentation of the criminal–dialect of mugshots and resistance to in the age of the slow exposure–and her poem taking on “the unrepentant tantrums,” “exuberant thrashing.” Her assertion that the soiled voice (the poem) can perform a similar resistance. // Context matters, probably. See also, Kaia Sand’s work with the textual productions of a paranoid police.

“Conscripts of Modernity” – Ben Fama’s affectless splicing of analytic discourse with the proliferation of a luxury brand (here in particular I thought of Kate Durbin), descriptions of the act of reading a catalogue, the inscription of fears of toxicity into catalogue copy (we can buy our negative freedom!), the fashion market, liberation and disciplining of gender.

Particularly w/the opening of the poem–“andre balazs (b. 1957) purchased the chateau marmot in 1990, at the start of a decade known as the longest period of peacetime economic expansion…balazs expanded his hotel collection when he purchased and restored the mercer hotel in downtown new york, establishing ‘the benchmark by which other fashionable design hotels would come to be judged.'” and so on is exciting to me. Perhaps descriptions of the real estate transactions in Silicon Value and/or of SV riches’ can be the new country-house poems.