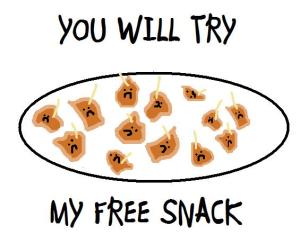 Jeremiah Gould is currently posting lines from my first book on his Twitter feed as part of his Line Collector Project. He describes it like this:

Line collector is a new project working in conjunction with Poem Projector to expand on authors I enjoy. Each Line Collector is a week-long twitter feed comprised of selected lines from the author’s work. Feel free to follow @LineCollector or check the Line Collector section on my blog sidebar.

He has also performed my work through Poetry Projector.

How does it feel to be dissected, taken out of context, and offered like a piece of meat on a toothpick in a food court next to trivia such as “I made kimchi fried rice for dinner” & “I can’t clip my toenails accurately”?

It feels weird. I want to protect my lines, control them, make their context the context of the book itself.  Some of them are pretty and with flowers. What if people think I’m just a pretty flowers poet? I mean, what is a line and what can it really do? Is there a line of poetry, 2 lines, that can stop you in your tracks? I am curious about this. Would or should you tweet them?

Given that Twitter is such a place of cursory attention, I wonder if it really is the ideal place for poetry which we like to imagine demands sustained attention. Instead it is part of a scrolling wallpaper that looks like this:

Annie was an orphan because she was a filthy, disgusting, ginger child who wouldn’t stop singing.

Have you read Stranger Will? Don’t forget about Charactered Pieces on Kindle amzn.to/CPkindle and Nook bit.ly/gtE6nT.

Kill me. I am different. #notsixwords

In one light, the lines have become part of a longer, associative collective poem that I can only read once and will probably not read closely ever. But it is there, taking its place amid the collective  effluvium, leveled and raised. And in a way, he’s bringing lines which mean less and less every time I read them back to life. Activating in them things that were hidden to myself. That’s pretty great.

In another light, is it just another bump in the endless circle of social media bumps? A tweet enters a  sort of market where people build social capital in strange diffuse ways.  And a lot of things are making me cynical in regard to the twitter feed, distrustful of the things people say they like or recommend (except you, if you’re reading this!). Have they really read, engaged with it? Whatever motivations might they have to signifying their approval or displeasure? When will we reach a tipping point between seeing an organic feed and a feed whose contents are the product of planning, strategy, etc? In many ways, we are already living in the era of Tweet-ola.

Or is living in the suburbs just making me become a paranoid a-hole? (Baltimore soon–not soon enough!)

In the end though, I’m glad Jeremiah is doing what he’s doing. At the very least it is flattering. More than that, its bracing to be reminded of the fact that my work is no longer my own. It can be pulled apart and reconstituted into some greater glorious architecture/dogfood. And maybe the best way to invite engagement with something (and also with oneself as a lover of things) is to put it out there. Poetry is one of the few things that you can tweet, and the selection of a few lines in and of itself is an act of attention and care. So thank you, Jeremiah.