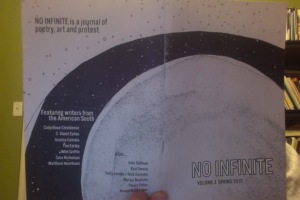 Garden of Rain by Mike Maggio

Mike has always been a political poet (past collections: Oranges From Palestine, deMOCKcracy). This is a change: a more reflective, directly lyrical collection. Finding their quiet intensity even more so given the (necessary) fury of his past work.

Sean Bonney: “not so long ago I tried to convince you that plague is the only solidarity we might have left, as if that plague might lead to some kind of new force of collectivity, on both molecular and social levels, wherein a new utopia might open up before our eyes, a rose-garden of strange harmony, new forms of human and inhuman love. Perhaps I got it wrong. I mean, I’ve been ill for quite a while now, and if I feel solidarity with anything at all, its simply with the forces of namelessness and invisibility”…then it continues to be heavy and political in a charmingly bracing way.

Smoldering southern freak outs that a voice in me feels intense kinship w/. The poise of Sara Nicholson. . Justin Katko drops a ton of bricks on handwringing over poetry’s non-revolutionary illegitimacy and the po’ could every be cheap as free until its free and you can eat it too. On critics asking poetry to uncomplicate itself for an illusory working class audience so it can be comprehended: “The main problem with this fantasy is that it is upside-down: because it is intellectual poets who largely fail to comprehend the complicated forms and ideas made by the working classes. Universities will always be on the back foot in their provision for these forms. Possibly our work will increase in correct complication as we audience the poets whom the upside-down fantasy thinks should be audiencing us” (49).