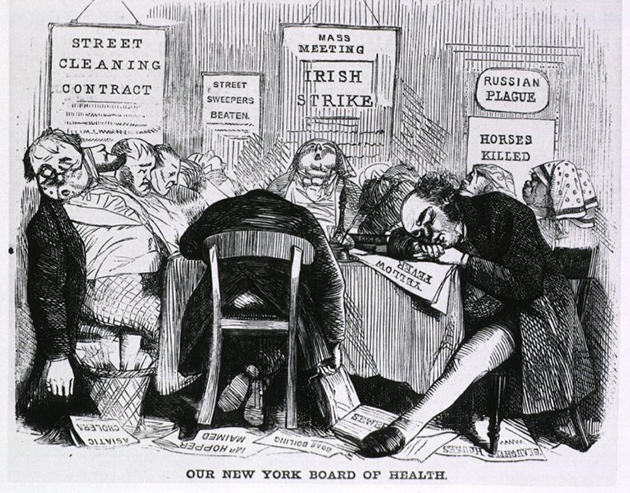 If you know me (hi, all five of you), you know I’m obsessed with how water became privatized in the seventeenth and eighteen centuries. How did the source of life–abundant, common, spirit-matter—get transformed into a source of private profit? How did something people across cultures agreed was a common good turn into something that could be bought and sold as a commodity?

Today’s slice of the story comes from Gotham, a doorstop history of early New York by Edwin Burroughs ad Mike Wallace. It involves the plague, a 1798 outbreak of yellow fever in New York City that killed approximately 5% of the population and which caused the city’s wealthy residents to flee the city while the plague did its terrible work.

The yellow fever’s mass deaths galvanized public and political will to clean up a classically oozy eighteenth century North Atlantic city with garbage in the streets, open sewers, and overflowing cesspools. As a result, almost all of the city’s fresh water supplies were polluted.

In response, New York’s Common Council drafted a bill for the creation of municipal waterworks to supply the city with fresh water. The bill was explicit: this was to be a not-for-profit project.

It’s at this point that the popular will for an ambitious water-infrastructure project was subverted by the profit motive of New York’s political and capitalist elite. Several leading figures, including Aaron Burr and Alexander Hamilton, argued against a non-profit water supply. Instead, they advocated the formation of a private company that would supply the city water and that would be empowered to use surplus capital for “monied transactions or operations.”

Burr’s ultimate goal was to use the water company to form a bank. And this is what happened. Burr and company found investors, formed the Manhattan Company, formed a bank, and quickly used the leverage of its backers to force the city of New York to becomes its customer. This would become Chase Manhattan Bank (that Chase Manhattan, as in JP Morgan Chase Manhattan Bank).

While the bank thrived, the Manhattan Company’s system of water supply was disastrous. Against engineers’ recommendations, the company used hollow pine logs to pipe water. These would quickly rot. Instead of steam engines, they used a horse-drawn pump. Instead of a reservoir of a million gallons the city estimated it needed, the company’s reservoir was 132,600 gallons. After two years, the project had managed to lay only six miles of pipe and supply only four hundred homes. These were decisions that quite nakedly favored shareholder profits over public health.

There’s another cruel inversion here: water is one of the most fundamental common resources. The Manhattan Company turned the public provision of water into what would become a huge cog in global banking, part of the engine of private accumulation and capitalization. What was to become a local public good, became instead, the seed of international capitalist finance.

In the nineteenth century, the Manhattan Company would invest heavily in the slave economy – cotton, sugar, and the triangle trade. This investment in slavery is also a story about water and who owns it. New York banks extended credit to southerners who wanted to establish or expand plantations. This credit was crucial in driving the further, violent dispossession of indigenous people from their lands and waters. This dispossession was the first step of moving many of these waters from use based systems of property to private ownership, the transformation of places defined by indigenous peoples’ and political structures’ overlapping use rights to violently homogenized commodity landscapes (not without resistance or exception (see JT Roane’s work, for instance)). I need to know more about this in the American context. Research for another day.

Anyway, mind the gap between popular will for change and elite translation of that will into policies and institutions that serve their own ends.